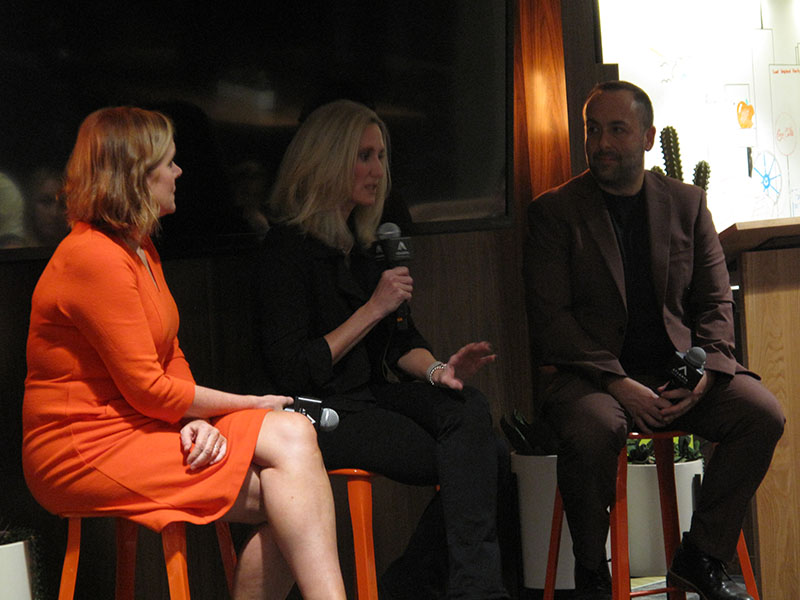 Sam Whitehead vividly recalls one of the first stories that landed on his desk when he started as the health reporter for WABE in January.

It was about a complicated health policy topic called certificate of need, or the laws some states use to determine when and where a new health care facility can be opened.

“It was much bigger, and much longer than I could ever get into in one story,” he recalled. The difficulty with policy stories is that they can be so complex, yet devoid of real people, Whitehead explained.

And like other journalists on the health care beat, he had to a find a human angle in very “wonky” content. It took creativity to boil it down to the basics for readers.

Whitehead is one of several reporters who shared tips and insight on how to cover the health and medicine beat with Grady College of Journalism and Mass Communication students and others this fall.

Whitehead and Ariel Hart of the Atlanta Journal Constitution both, visited UGA’s campus on Oct. 2, where they spoke to graduate students tasked with covering rural health for the Fall semester.

And on Sept. 30, a handful of Grady students traveled to Atlanta to attend The Anatomy of Great Health Reporting, a workshop hosted by The National Academy of Television Arts & Sciences. That event featured Jaye Watson of Georgia Public Broadcasting’s “Your Fantastic Mind” and Beth Galvin of WAGA FOX 5’s medical team.

Reporters emphasized that when writing about health and medicine, it’s important to focus on the human being, to know your audience and to avoid overloading with too much information. Students had several takeaways they could immediately apply to their own reporting strategies. “In the realm of health reporting, it’s easy to get caught up in the study or the numbers,” noted Madeline Laguaite, a student studying health and medical journalism, with an interest in LGBTQ mental health. “Health stories, at their core, are human-centric stories,” she said.

The journalists also stressed the importance of empathy, noted graduate student Crysta Jones, an Atlanta native who aspires to be a bilingual reporter. “In feature stories about the health of patients, I don’t think readers want a stale regurgitation of facts,” she said.

Whitehead said he didn’t shy away from the challenge of writing about certificate of need. Keeping the audience in mind, he first wrote a simple explainer to help WABE readers understand the facts, and why efforts by Georgia lawmakers and lobbyists could matter to the everyday consumer.

For students interested in covering the health care beat, here are the top tips shared by each of the Georgia-based reporters. Click on the tip for additional details.

Every health story is a human story and we often play the role of translator, said Jayne Watson of GPB during the NATAS event.

“Focus on the human being,” she said. “And build the medical story around them.”

2. Get out of the hospital

“Don’t just try to get the information… get the emotion,” said Beth Galvin of WAGA. To do that, spend time with people and have meaningful conversations.

Watson agreed. In fact, her philosophy for writing about patients undergoing medical procedures is to “get out of the hospital!” Try to meet the patient at their home, or ask if you can ride with them to the procedure, she said.

3. Admit what you don’t know

It takes a while to learn complex medical terms. But the last thing anyone wants is to leave the interview without clear answers. Throw yourself under the bus and admit when you don’t know things, urged Galvin. Then, request explanations.

And it’s okay to ask the same question in different ways during an interview, Watson added. “By the second or third time, they tend to say it in a better way,” she told the audience.

The Georgia-based reporters said they focus on what matters to residents in their local communities. It’s important to keep that in mind when writing, Ariel Hart of the AJC told the graduate student class.

It’s okay to get naked,” Watson said. You’re a reporter, but you’re a human first. “Don’t rehearse too much,” she said. “It’s about having a conversation.”

“Interviews are a very transactional thing, but there are things you can do to push out of that space to form a relationship,” said Whitehead. “Draw from shared experience.”

If you come in with preconceived notions, you come in with blinders on, Whitehead noted. Hart added that she had to learn to pause, especially when she came to interviews believing she already fully understood the topic.

“If I can get myself to shut up and listen to people— which is hard on deadline— I can come to understand a lot more,” she said. “And people will respond better when they sense that you are there to genuinely learn.”

Factcheck everything, and start in parts of the story where you feel MOST comfortable, not where feel the LEAST comfortable, Hart recommended. We can often be blinded by the facts we think we know, and make mistakes as a result.

Whitehead said one strategy he uses is to read the final story backwards, sentence by sentence. When you read from beginning to end, you tend to anticipate what’s coming next, he said.

A lot of information is gathered during the reporting process, but every detail doesn’t have to go into the story. “Find the essence,” said Galvin. Too much detail can make the story lose focus, or drive the intended audience away. Some things can be saved for a follow-up story, reporters said.